Every fan's journey begins with a Valiant first step.

Discuss the VALIANT comics, characters, and collecting.
PLEASE DO NOT REVEAL SPOILER INFORMATION IN YOUR TOPIC TITLE.

DirtbagSailor
I only know how to fish, f^%k, fight, and throw rocks

"We are the definitive authority on all things dOrPy!" 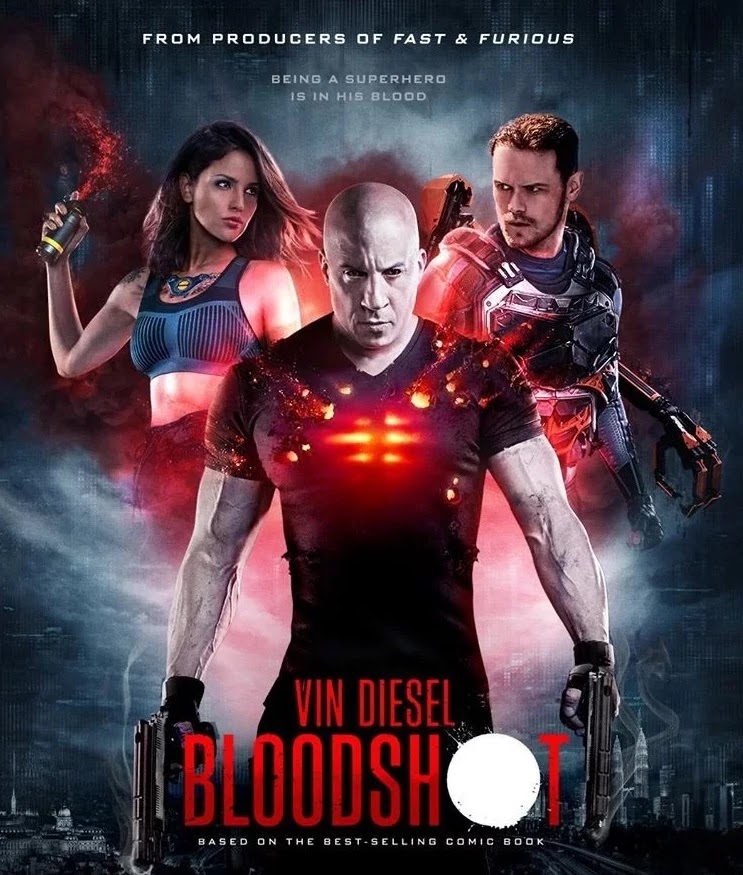 So I finally sat down to watch this - the launch of the Valiant U on film and I think this can be kept pretty short.

It's not a bad movie at all. But there was no way this flick, even in a good movie-going economy, was going to launch a Universe on film. It lacks iconic archetypes completely. It's a decent Vin Diesel flick, but it wasn't much more than Vin Diesel in a nike jump suit or a tank top as a guy that occasionally reassembles himself amidst generic cybernetically enhanced "bad guys", none of which are iconic or superbly visual on screen.

If you didn't tell someone this was a comic book flick, they probably would just think it's your typical sci-fi movie in Diesel's catalog, no different than something like Babylon A.D.

Vin Diesel wears a workout jump suit and fights cyborg-guy and "eyeball suit guy" with obligatory Michael Bay-style hot chick who probably soaks up instagram followers on the side. I'm glad I saw it. I won't need to watch it again, which is unfortunate. It was fine.
Instagram
eBay
Top

Phantom
I will call my mum and ask what the *SQUEE* is going on.

I will watch again.
Plus I will listen to otv again, they shared a lot of info about production and changes I didn't know.
I don't have any streaming movie service.
Will by on DVD when It comes out.
I wish their was a Spinal Tap comic, and I had a copy CGC graded at 11.
Top

Dallow Spicer1
Rockin' out in Torquehalla

Good film and good chat about the film!

I’d like to hear the VCR crew’s speculation about what Dinesh would have done with the Bloodshot comic in the lead up to the film’s release? You can guarantee it would have been 1000x better than what Acclaim 2.0 gave us!
Top

jmatt
Mmm, I was drooling over Cooshie tonight.

I agree with a lot of the points you guys made... especially the nanites traveling back to reform the body part that was injured. And I felt that way since the first trailer. But it's more cinematic, I suppose.
Top

jmatt wrote: ↑
Sun Apr 05, 2020 8:39:18 pm
I agree with a lot of the points you guys made... especially the nanites traveling back to reform the body part that was injured. And I felt that way since the first trailer. But it's more cinematic, I suppose.

It was for effect. I loved Jesses ideas on a sequel. Hopefully we get a sequel and it continues on and expands. I really enjoyed the movie!
Top

Great review, guys! I was able to take a group of 9 people to the movie theater to see it one day after the opening night. There were maybe 14 people at the showing altogether, so not a huge turnout. Just a few days later and all movie theaters would be closing. My group did not know very much about Bloodshot, except what I had shared with them, but everyone enjoyed it and said it was a good action movie. We also had the benefit of a theater with the DTS sound system and that made the actions scenes even better.
Top

I started to watch it and need to finish it.
I wanted to be so stoked for this, but it's looking super formulaic and vanilla.

The goal was to hit the theater and check it out, but COVID spoiled my plans on doing that.
I'll finish it and hopefully review it soon.

As far as the other movies are concerned, my hopes (I haven't read much on the others) are that the production won't get slashed because of the poor performance and lackluster reviews of the film.
I want to see this universe get unpacked, but it seems like there may be hurdles to jump over.

The goal was to hit the theater and check it out, but COVID spoiled my plans on doing that.
I'll finish it and hopefully review it soon.

As far as the other movies are concerned, my hopes (I haven't read much on the others) are that the production won't get slashed because of the poor performance and lackluster reviews of the film.
I want to see this universe get unpacked, but it seems like there may be hurdles to jump over.

The movie was on track to be a hit. Had theaters stayed open I fully believe we would already be hearing about a sequel. When you finish watching the movie, listen to the podcast as there is a lot of info on it. I would love to hear your thoughts after that. In the meantime enjoy the action movie that is the first EVER Valiant movie!

leonmallett
My mind is sharp. Like a sharp thing.

By what measure was it on track to be a hit? $45 million USD budget, with standard advertising ratio and ticket revenue suggests circa $120 million-plus just to break even.

The movie was tracking to open at $10 million across its first weekend, yet opened second on the top 10 in the US; so relative to a possibly depressed market it still wasn't sitting at the top of the pile.

There was a lot of ground to claw back, especially as the margin of return from overseas markets is typically tighter than for US productions in the USA.
VEI - I look forward to you one day publishing MORE than 9-10 books per month
Top

I don’t know where you got 45 mil from. That would have been week 1. Obviously it had a lot more to go. I feel very confident that it would have crossed the 100 mil mark, and that’s not counting the world wide. By any standard I would say that’s a hit.
Top

leonmallett
My mind is sharp. Like a sharp thing.

You feel confident is different than typical indicators, and no industry evidence backs that up.

Few movies make more in their second week than their first, (27%), with the average week two gross half of week one: https://stephenfollows.com/how-importan ... ox-office/

Marketing is not part of the production budget above, and will typically mean that when taxes and theatre cuts are factored in, a movie will need to make 2.5 to 3.5 times its production budget, hence my comment re: $120 million plus. Returns from overseas screenings are typically on a slimmer margin than the USA.

Back in January, before COVID-19 measures really bit and were announced in the USA, Bloodshot was predicted for $12-$17 million week one, over a USA gross predicted between $30 million and $45 million: https://boundingintocomics.com/2020/01/ ... lm-arrive/

This wasn't a surprise hit that would upend expectation; it finished second on its opening weekend. Even applying a generous four-fold multiplier to the high end $17 million January prediction, that would have been a gross of $68 million. Doing the same business overseas has slimmer margins because of local taxes (e.g. VAT in Europe, which is 20% in the UK for reference).

In other words, even had it opened at the high end and exceeded USA domestic overseas, it may still not have broken even.
VEI - I look forward to you one day publishing MORE than 9-10 books per month
Top

By any standard of the 1990s, that would have been a hit. We're old. The $100m mark doesn't mean anything anymore.

Bloodshot was not going to be a hit. It might have recouped it's budget (including advertising) and in a world where universes and sequels are the norm, it may have gotten the sequel green light. But that's best case scenario. I genuinely don't see how this movie was on target for best case scenario. I know everyone poo-poos critics, but even the general audience was mixed reviews.
"If you think any of these [older comics/shows/movies] do not carry a political content and is not using the medium of science fiction to explore real-world ideas, than you have not been paying attention." - Dan Abnett, VCR #246
Top
Post Reply
13 posts • Page 1 of 1